Children’s gardens often have that unfortunate dumbing-down-of-nature quality — giant neon caterpillars, cutesy mushroom houses — but there is no such condescension at the Brooklyn Botanic Garden’s new Discovery Garden, which opened last Saturday.

The garden, designed by Michael Van Valkenburgh Associates, is geared toward immersing children in nature, but this meandering acre is for grown-ups, too: They could be seen last week, rolling down a steep, grassy hill or peering into the bark of a century-old cork tree to see if they could spy any insects crawling out of one of the burls.

A nearby sign explains that such burls, or bumps, are caused by insects: “The female lays her eggs under the bark. Inside, the young fatten up on wood, then eat their way out.” This garden is full of such revelations. In the marsh, which is thick with milkweed, another sign tells the story of the Monarch butterfly and notes, in a delightfully understated way, that “butterflies have taste buds in their feet.” 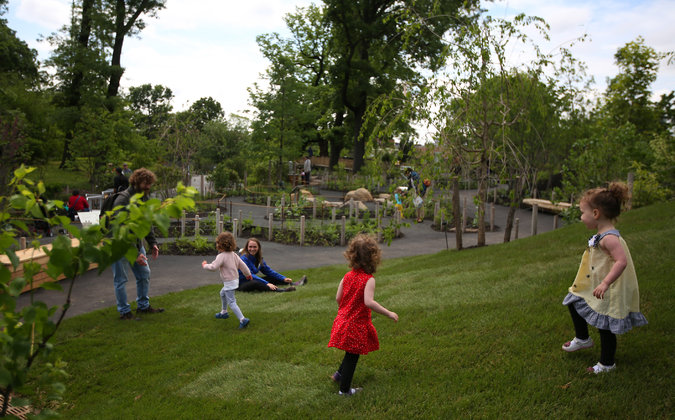